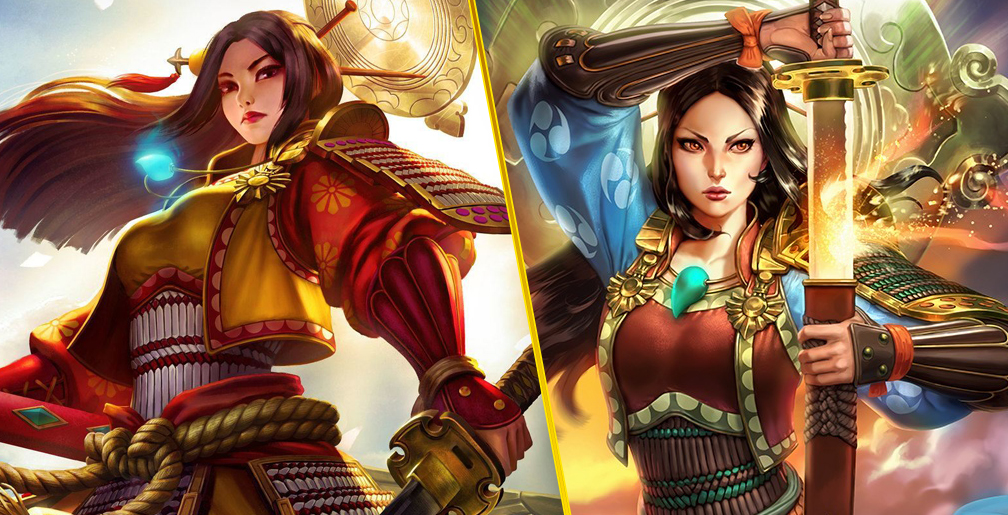 Lore
As the first rays of dawn cross the horizon, before all else they touch the land of the rising sun. A realm of islands painted with the careful brush strokes of its deities. That morning light, which brings warmth and life is Amaterasu, the benevolent Goddess of the sun. Universally, she is adored.

Less so are her brothers, namely Susano-o, bringer of storms, whose jealousy of his sister’s popularity drove him burn her golden rice fields and shatter the sacred looms of her people. Grief stricken at the destruction, Amaterasu sealed herself inside a deep cavern. Her people suffered and the realm fell into crushing darkness.

Seeing all those that depended on her, all those that loved her, Amaterasu vowed never again to hide away from calamity. She would, instead, face it, just as the dawn rises each new day.

Passive : Illuminating Strike
Amaterasu illuminates enemies she hits with Basic Attacks. After three hits on the same target the enemy gains an Aura, exposing their weaknesses and causing them to take more damage (10%) from all sources for 5 seconds. Any other enemies that come near the afflicted target are weakened as well.
Max Auras Possible: 3.

Ultimate : Dazzling Offensive
Amaterasu focuses the power of the heavens into an impressive three strike combination attack. The second hit will do 20% more base damage and Slow enemies. The third hit will do 40% more base damage and Stun enemies. She must hit an enemy target with each hit to progress the combo.
Cost: 100.
Cooldown: 75s.
First Strike Damage: 75/125/175/225/275 (+50% of your Physical Power).
Slow Duration: 2s.
Stun Duration: 2s.

SKINS
*Click on each image for the full resolution!

ACHIEVEMENTS
Poseidon
Water Rises
As Poseidon keep your tide meter above 50% for more than a minute.

Khepri
Never Fear, Khepri’s Here
As Khepri Save everyone on your team, including yourself, in one game with your Ultimate.

Let’s Hug
As Khepri Abduct an enemy that is affected by Solar Flare five times in a single match.

Xing Tian
Whirlwind of Pain
As Xing Tian Get an assist on three enemies within 5 seconds using his Ultimate.

The Rage
As Xing Tian Reach and stay at full Stacks of Smoldering Rage for over 30 seconds.

Removed the ‘T’ screen.
At this time we are removing the ‘T’ Screen from SMITE, for both design and technical reasons. As a whole, we felt it offered a gameplay advantage that was not particularly engaging (IE: Staring at graphs to find the timer for Gold Fury) and as such it is being removed.

Ymir’s footsteps have been redone on all Ymir skins.